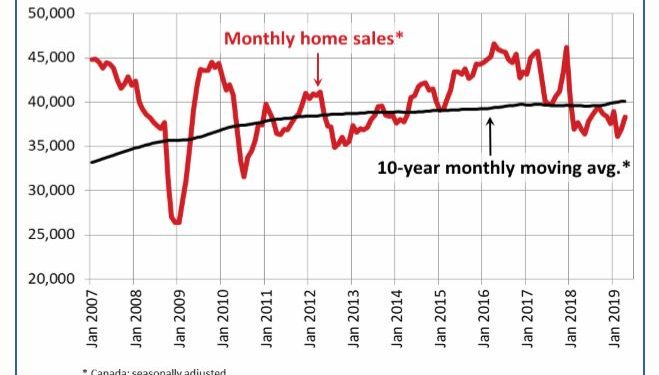 Home sales recorded via Canadian MLS® Systems rose by 3.6% m-o-m in April 2019. After having dropped in February to the lowest level since 2012, the rebound in sales over the past two months still leaves activity slightly below readings posted over most of the second half of 2018. (Chart A)

April sales were up in about 60% of all local markets, with the Greater Toronto Area (GTA) accounting for over half of the national gain.

Actual (not seasonally adjusted) sales activity was up 4.2% y-o-y in April (albeit from a seven-year low for the month in 2018), the first y-o-y gain since December 2017 and the largest in more than two years. The increase reflects gains in the GTA and Montreal that outweighed declines in the B.C. Lower Mainland.

“Housing market trends are improving in some places and not so much in others,” said Jason Stephen, CREA’s President. “All real estate is local. No matter where you are, a professional REALTOR® is your best source for information and guidance in negotiations to purchase or sell a home during these changing times,” said Stephen.

“Sales activity is stabilizing among Canada’s five most active urban housing markets,” said Gregory Klump, CREA’s Chief Economist. “That list no longer includes Greater Vancouver, which fell out of the top-five list for the first time since the recession and is well into buyers’ market territory. Sales there are still trending lower as buyers adjust to a cocktail of housing affordability challenges, reduced access to financing due to the mortgage stress-test and housing policy changes implemented by British Columbia’s provincial government,” said Klump.

The number of newly listed homes rose 2.7% in April, building on March’s 3.4% increase. New supply rose in about 60% of all local markets, led by the GTA and Ottawa.

With sales up by more than new listings in April, the national sales-to-new listings ratio tightened marginally to 54.8% from 54.3% in March. This measure of market balance has remained close to its long-term average of 53.5% since early 2018.

Based on a comparison of the sales-to-new listings ratio with the long-term average, about three-quarters of all local markets were in balanced market territory in April 2019.

There were 5.3 months of inventory on a national basis at the end of April 2019, down from 5.6 and 5.5 months in February and March respectively and in line with the long-term average for this measure.

Housing market balance varies significantly by region. The number of months of inventory has swollen far beyond long-term averages in Prairie provinces and Newfoundland & Labrador, giving homebuyers there ample choice. By contrast, the measure remains well below long-term averages in Ontario and Maritime provinces, resulting in increased competition among buyers for listings and fertile ground for price gains. 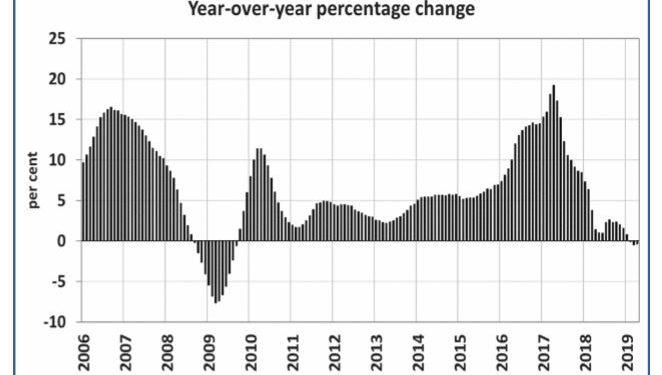 The Aggregate Composite MLS® Home Price Index (MLS® HPI) appears to be stabilizing, having edged lower by 0.3% y-o-y in April 2019. (Chart B)

Trends continue to vary widely among the 18 housing markets tracked by the MLS® HPI. Results remain mixed in British Columbia, with prices down on a y-o-y basis in Greater Vancouver (GVA; -8.5%) and the Fraser Valley (-4.6%), up slightly in the Okanagan Valley (1%) and Victoria (0.7%), while climbing 6.2% elsewhere on Vancouver Island.

Among Greater Golden Horseshoe housing markets tracked by the index, MLS® HPI benchmark home prices were up from year-ago levels in the Niagara Region (6.2%), Guelph (5.1%), Hamilton-Burlington (4.6%) the GTA (3.2%) and Oakville-Milton (2.5%). By contrast, home prices in Barrie and District held below year-ago levels (-5.3%).

Across the Prairies, supply remains historically elevated relative to sales and home prices remain below year-ago levels. Benchmark prices were down by 4.6% in Calgary, 4% in Edmonton, 4.3% in Regina and 1.7% in Saskatoon. The home pricing environment will likely remain weak in these cities until demand and supply return to better balance. 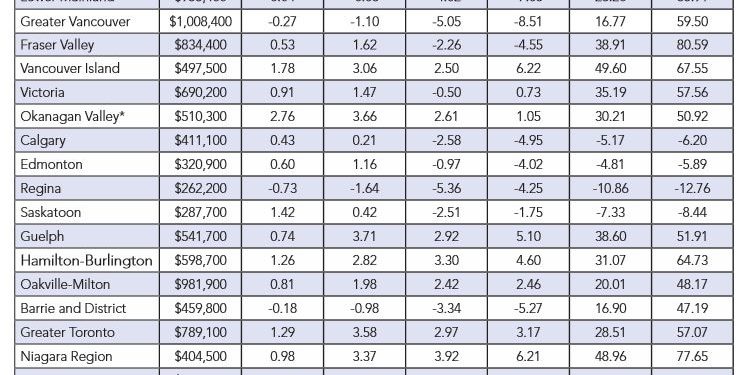 The MLS® HPI provides the best way to gauge price trends, as averages are strongly distorted by changes in the mix of sales activity from one month to the next.

The national average price is heavily skewed by sales in the GVA and GTA, two of Canada’s most expensive housing markets. Excluding these two

markets from calculations cuts almost $104,000 from the national average price, trimming it to just over $391,000.