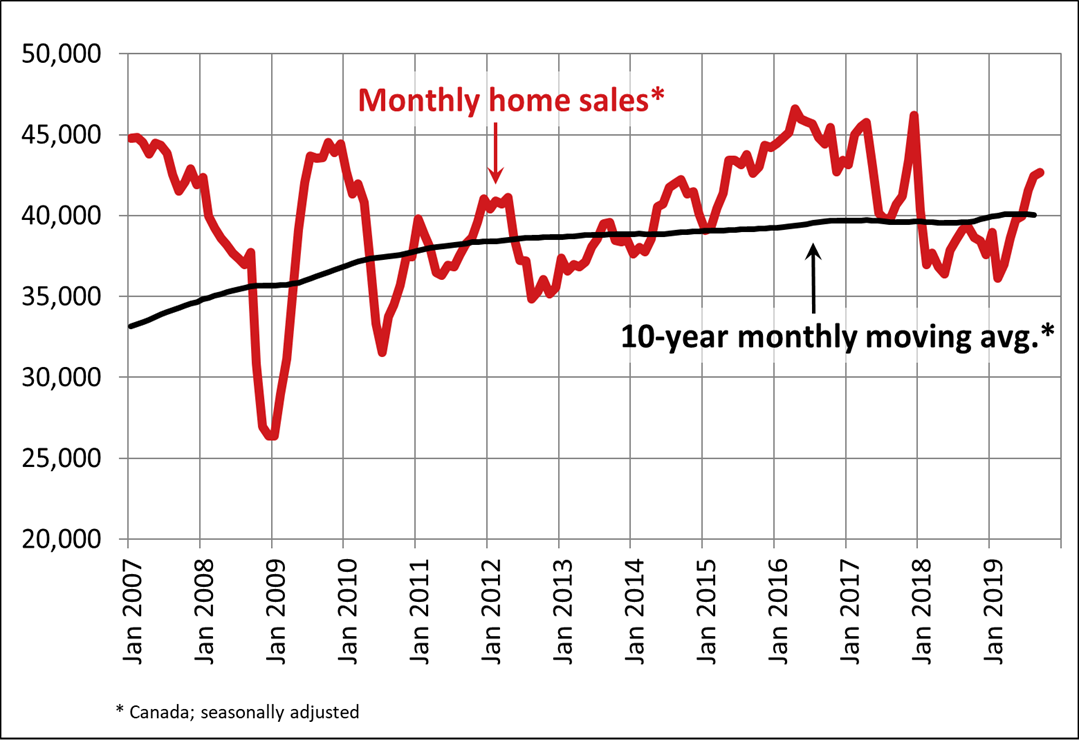 Home sales recorded via Canadian MLS® Systems advanced for the seventh consecutive month, raising them 18% above the six-year low reached in February 2019 but leaving them about 8% below highs reached in 2016 and 2017. (Chart A)

Activity was up in slightly more than half of all local markets, led by Greater Vancouver (GVA) and the Fraser Valley (which together constitute the Lower Mainland of British Columbia).

Actual (not seasonally adjusted) sales activity was up 15.5% year-over-year, reflecting the combination of slow sales in September 2018 and a rebound in activity this year. Transactions were up from year-ago levels in all of Canada’s largest urban markets, including the Lower Mainland of British Columbia, Calgary, Edmonton, Winnipeg, the Greater Toronto area (GTA), Hamilton-Burlington, Ottawa and Montreal.

“National sales activity has begun to rebound in recent months,” said Jason Stephen, president of CREA. “That said, all real estate is local, so there’s a lot of variation in the strength of the rebound depending on the housing type, location and price segment. Nobody knows that better than a professional REALTOR®, your best source for information and guidance when negotiating the sale or purchase of a home,” said Stephen.

“Home sales activity and prices are improving after having weakened significantly in a number of housing markets,” said Gregory Klump, CREA’s Chief Economist. “How long the current rebound continues depends on economic growth, which is being subdued by trade and business investment uncertainties.”

The number of newly listed homes edged back by 0.6%. The small increase in sales combined with the small decline in new supply tightened the national sales-to-new listings ratio to 61.3% in September. This measure has been increasingly rising above its long-term average of 53.6%. At this point, this measure remains in balanced market territory, but is favouring sellers more than buyers.

Based on a comparison of the sales-to-new listings ratio with the long-term average, three-quarters of all local markets were in balanced market territory in September 2019, including the GTA and Lower Mainland of British Columbia. Of the remainder, the ratio was in sellers market territory in all housing markets except Saskatoon and Southeast Saskatchewan.

There were 4.5 months of inventory on a national basis at the end of September 2019 – the lowest level recorded since December 2017. This measure of market balance has been increasingly retreating below its long-term average of 5.3 months.

As with the sales-to-new listings ratio, the number of months of inventory is still within balanced market territory but tilting in favour of sellers; however, national measures of market balance continue to mask significant regional variations.

The number of months of inventory has swollen far beyond long-term averages in Prairie provinces and Newfoundland & Labrador, giving homebuyers ample choice in these regions. By contrast, the measure is running well below long-term averages in Ontario, Quebec and Maritime provinces, resulting in increased competition among buyers for listings and providing fertile ground for price gains. Meanwhile, the measure is well centered within balanced market territory in the Lower Mainland of British Columbia, making it likely that prices there will continue to stabilize. 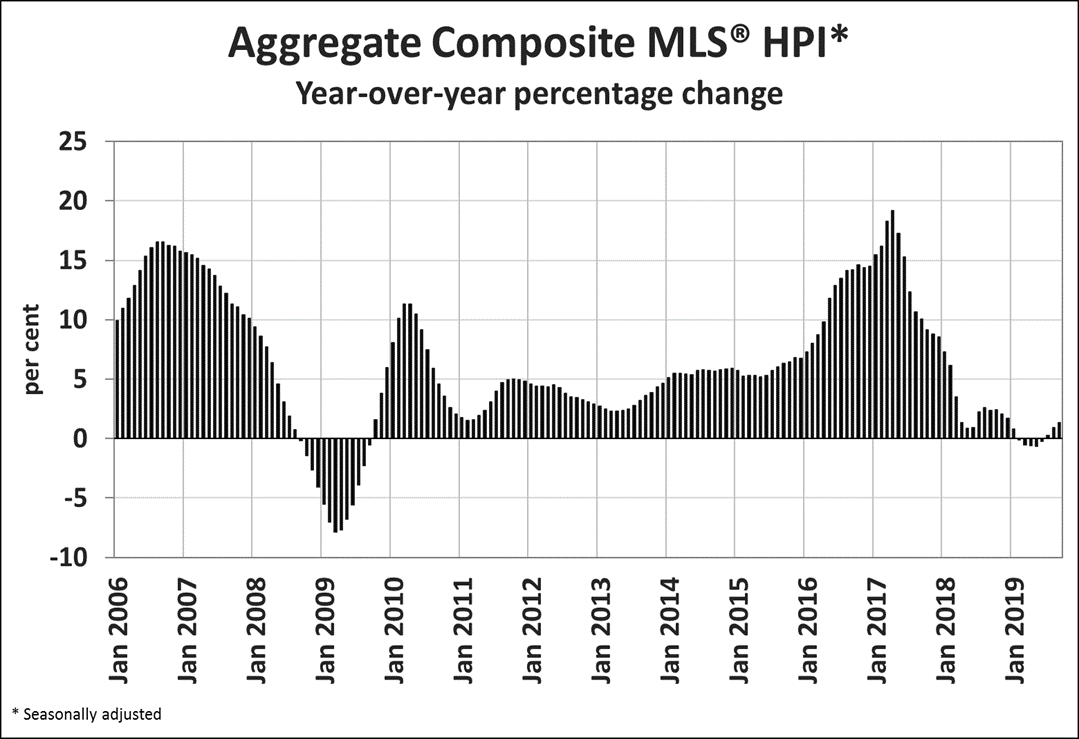 Seasonally adjusted MLS® HPI readings in September were up from the previous month in 13 of the 18 markets tracked by the index. (Table 1)

In recent months, home prices have generally been stabilizing in the Lower Mainland and the Prairies, where previously they were falling. Meanwhile, price growth has begun to rebound among markets in the Greater Golden Horseshoe (GGH), rejoining the ongoing price gains in housing markets located further east.

The actual (not seasonally adjusted) Aggregate Composite MLS® (HPI) was up 1.3% y-o-y in September 2019, the biggest year-over-year gain since December 2018. (Chart B)

Home prices in Greater Vancouver and the Fraser Valley remain furthest below year-ago levels, (-7.3% and -4.8%, respectively), although declines are becoming smaller. Elsewhere in British Columbia, home prices on Vancouver Island and in the Okanagan Valley logged y-o-y increases (4% and 1.1%, respectively) while they edged slightly higher in Victoria (+0.4% y-o-y).

Prairie markets posted price declines ranging from about 1% to around 4% on a y-o-y basis in September, while y-o-y price growth has re-accelerated well ahead of overall consumer price inflation across most of the GGH. Meanwhile, price growth in recent years has continued uninterrupted in Ottawa, Montreal and Moncton.

All benchmark home categories tracked by the index returned to positive y-o-y territory in August 2019 and gains further increased in September. Two-storey single-family home prices were up most, rising 1.7% y-o-y. One-storey single family home prices rose 1.4% y-o-y, while townhouse/row and apartment units edged up 0.4% and 0.7%, respectively.

The MLS® HPI provides the best way to gauge price trends, because averages are strongly distorted by changes in the mix of sales activity from one month to the next.

The actual (not seasonally adjusted) national average price for homes sold in September 2019 was around $515,500, up 5.3% from the same month last year.