Ottawa, ON, June 15, 2017 – According to statistics released today by The Canadian Real Estate Association (CREA), national home sales posted a sizeable decline in May 2017. 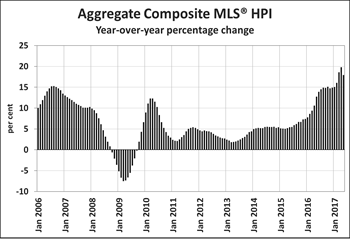 The number of homes sold via Canadian MLS® Systems fell by 6.2% in May 2017 compared to April. The month-over-month (m-o-m) percentage decline was the largest since August 2012.

markets across the Greater Golden Horseshoe region, including Oakville-Milton, Hamilton-Burlington and Barrie. By contrast, activity rose to multi-year highs in Montreal and Quebec City.

Actual (not seasonally adjusted) activity was down 1.6% on a year-over-year basis in May, with year-over-year (y-o-y) gains in about 60% of all local housing markets offset by the sharp drop in the GTA (20.8% y-o-y). Calgary, Edmonton, Ottawa and Montreal were among a number of urban centres where May sales surpassed year-ago levels.

“Recent changes to housing policy in Ontario have quickly caused sales and listings to become more balanced in the GTA,” said CREA President Andrew Peck. “Meanwhile, the balance between supply and demand in Vancouver is tightening up, while many places elsewhere in Canada remain amply supplied. All real estate is local, and REALTORS® remain your best source for information about sales and listings where you live or might like to.”

“This is the first full month of results since changes to Ontario housing policy made in late April. They provide clear evidence that the changes have resulted in more balanced housing markets throughout the Greater Golden Horseshoe region,” said Gregory Klump, CREA’s Chief Economist. “For housing markets in the region, May sales activity was down most in the GTA and Oakville. This suggests the changes have squelched speculative home purchases.”

The number of newly listed homes edged up a further 0.3% in May following April’s jump of almost 10%. New listings in May remained high in and around the GTA; however, the York Region of the GTA posted the largest month-over-month decline in new supply. Similar percentage declines were also evident for new listings in Oakville-Milton and Barrie.

With sales down considerably in May, the national sales-to-new listings ratio moved out of sellers’ territory and back into balanced market territory for the first time since late 2015. The ratio stood at 56.3% in May 2017, down from 60.2% in April and the high-60% range over the first three months of this year.

A sales-to-new listings ratio between 40 and 60 is generally consistent with balanced housing market conditions, with readings below and above this range indicating buyers’ and sellers’ markets respectively.

The ratio was above 60% in more than half of all local housing markets in May, the majority of which are located in British Columbia and southwestern Ontario. The ratio is above 70% for Greater Vancouver and the Fraser Valley and above 60% for Montreal. By contrast, the ratio softened sharply in the GTA, closing out the month at 41%.

The number of months of inventory is another important measure of the balance between housing supply and demand. It represents how long it would take to completely liquidate current inventories at the current rate of sales activity. 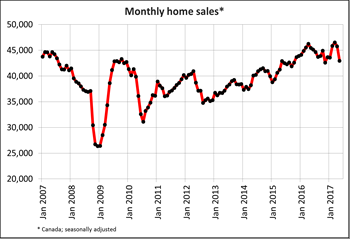 The Aggregate Composite MLS® HPI rose by 17.9% y-o-y in May 2017 compared to 19.8% in April. Price gains slowed sharply for single family homes.

While benchmark home prices were up from year-ago levels in 11 of 13 housing markets tracked by the MLS® HPI, price trends continued to vary widely by location.

After having dipped in the second half of last year, home prices in the Lower Mainland of British Columbia have been recovering and have either reached new heights or are trending toward them (Greater Vancouver: +8.8% y-o-y; Fraser Valley: +14.7% y-o-y). Meanwhile, y-o-y benchmark home price increases remained in the 20% range in Victoria and elsewhere on Vancouver Island.

Calgary and Regina traded places in May, with Calgary prices having posted the first y-o-y gain (+0.2%) in almost two years and Regina prices having moved into negative territory (-1.7%) for the first time since January 2016. Saskatoon home prices remained down from year-ago levels (-2.8%) for the 22nd consecutive month.

The MLS® Home Price Index (MLS® HPI) provides the best way of gauging price trends because average price trends are prone to being strongly distorted by changes in the mix of sales activity from one month to the next.